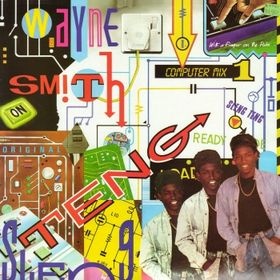 The original album from 1986 in now re-pressed! – Musicians: Cleveland « Clevie » Browne & Wycliffe « Steely » Johnson, the Super Power All-Stars, and Wayne Smith. Recorded and mixed at Prince Jammy’s Studio. Producer: Prince Jammy – « The ‘Sleng Teng’ riddim was created on a Casio MT-40 and is inspired amongst others by the riff from Eddie Cochran’s ‘Somethin’ Else' »

« Built on a pre-set drum track and bassline that Wayne Smith and a friend had discovered on a Casio keyboard in 1985, the « Sleng Teng » rhythm ushered in the « digital » age of dancehall reggae, made producer Prince Jammy’s fortune, and changed one face of reggae music forever – the rhythm was popular enough to spawn literally hundreds of versions and imitations, and it continues to be used as a standard backing track for reggae deejays more than twenty years after its original release. »